I am just collecting some thoughts about some observations and issues – while I am trying to understand Google Wave. 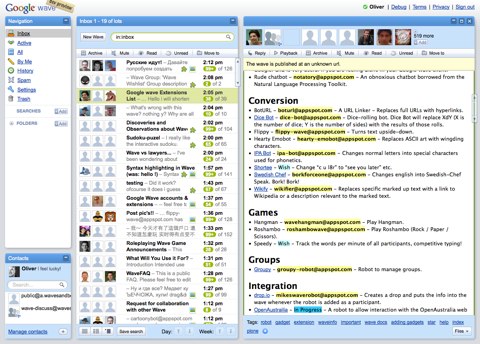 (see a demo on their site)

Google Wave is an integrated set of technologies (with protocols that allow semi-synchronous editing of outlines and their federation across several servers). With this approach Google Wave solves some difficult technical and infrastructural problems.

But it also generates some new problems that need to be solved to make Google Wave a success — otherwise I think users will not adopt the system (which in case of Google will set the seal on this project I suppose!).

Google Wave is a frameworked solution for things people did not ask for and communication processes that no one is practicing yet (but no one has really “asked” for the mouse as input device either!). It is hard to see where Google Wave is going to be. This breeds creation, but it also challenges the non-developer. There will be best practices, but it will take a lot of time to identify use cases that people can learn “to wave” with.

So Google Wave challenges the imagination – and few people will be able to answer the “What is it all about?” question easily. The horizon is schrouded in mist.

Possible approach: A potential solution to this is to start with guided tours (a LOT of them) showing very common and powerful use cases for different scenarios. This is probably going to happen when Wave gets closer to the public beta.

We have learned to communicate in a turn taking fashion. It is polite to let someone speak until he has finished before starting to respond. It is not polite for everyone to speak up at any time. Waves allow people to reply or edit without obeying to the turn taking pattern. This can cause “stress” and also a lot of misunderstanding. People could reply to a text, that is going to change without them noticing that. Their reply suddenly become nonsense – the playback feature could become the only way to percieve a conversation properly. But playback is new – people have learned that the threaded view is a chronology – but in Google Wave it is not (or not necessarily).

Even with the playback feature, people need to become aware of the asychronicity in Google Wave – and learn how to recap conversations correctly.

Possible approach: Find a very good way to understand the chronology of a wave (e.g. making the playback as fundamental for navigation of a wave like scrolling)

While Google Wave may integrate many messaging systems – it also generates a lot of density. Means of communication that were apart from each other – using different URLs and applications for each – are now combined. The crucial part of that is to understand which option is suited for what purpose.

With Waves being set to “updated” by displaying them in bold typeface and sorting it to become a top item in the inbox, this also means that things are brought to my attention that should remain buried for a good reason. Google Wave users would have to learn how to manageund understand the “Inbox” and the “Active” areas properly, to be able to get the most out of it.

Possible approach: Allow users very powerful and fine grained control over the way they are informed about updates.

One of the things that really can make things too complex to be comprehended properly is that people can read & write to waves – but replies can extend or narrow the scope (e.g. who may read and reply to a new item. Who is reading? Who am I replying to? Is this part really private or not? Am I releasing a secret to the public accidentally?)

Whenever I want to understand the perspective of someone else – in need to be able to represent his/her view in my mind. The change of scope for parts of a wave within that wave can make this difficult.

Possible approach: Make any changes of the scope (e.g. recipient list) within a wave very visible and allow users to navigate them.

One thought on “Thoughts on Google Wave”