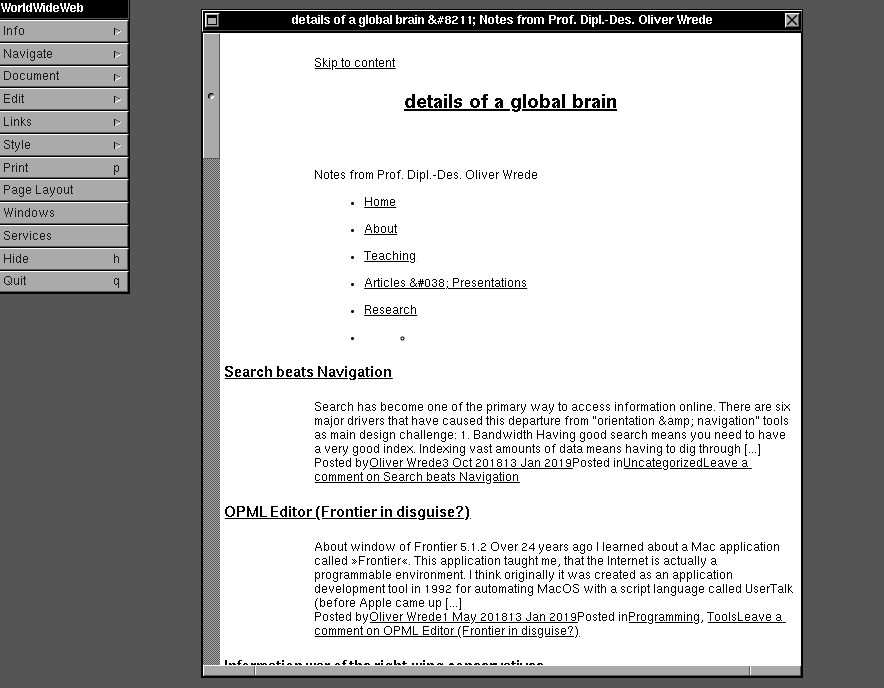 The World Wide Web was invented as a hypertext document repository by Tim Berners-Lee who was working at the CERN research institute in Geneva. The OS Tim was using was NeXT (a predecessor to the MacOS X of today). There is of the first web browser in a NeXT UI (following links apparently needs a double click).

This one is done in JavaScript. There was just black-and-white text. Links underlined. Not tables, no scripting, no images (there is also a site emulating other historic browsers). This is how it all began. And Berners-Lee made a proposal and later just followed a suggestion by his boss Mike Sendall (»Why don’t you do that hypertext thing?«) – so it is fair to say, that the WWW we use today was developed almost accidentally.

We came a long way.

As you can see in the screenshot it displays this current website pretty well. And this is how it should be: open and non-proprietary technology is for mankind – the rest for people to make money.

30 years later Tim Berners-Lee complains about the demise of the WWW intricate features. It has become a place where Google, Facebook and others suck in your personal data to turn it into money, governments spy on each other and state actors try to manipulate democratic elections.

In other words: Humanity has turned the web into a mirror of all good and bad things – not just the romantic version of enlighted selves that grow intellectually from insight to insight.

Society should be able to shape this technology through discourse, culture and experimentation – not corporations or lobbyists.